He becomes a professional photographer of Theatre and Contemporary Dance during 1978 and 1979. In this last year he is appointed Official Photographer for the II International Theatre  Sample. His pictures are published in several publications and magazines of Italy, France and UK. From 1990 he is dedicated solely to his paintings.

In 1996 he produces etchings for BETA CAPITAL MANAGEMENT, USA, and in 1998 for ABN AMRO.

In October 2006, the triptic “Y Volaron Sobre Párraces” was sold by Christies in an auction.

In Marbella, he exhibits his latest work in the galleries Houses of Art at the Marbella Club in 2010, and in Galería Cero in 2012.

From October 2013 to October 2015 he has been working and expanding his vision of the series ‘ROOTS’, that is going to be exhibited at the Tomasso Fine Art Gallery in London, in November 2015.

If you wish to contact Joaquin, please send an eMail to joaquin@jsantossuarez.es 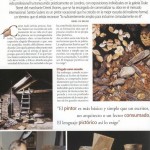 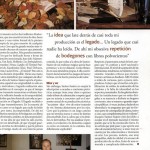 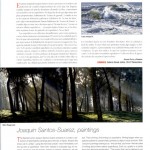